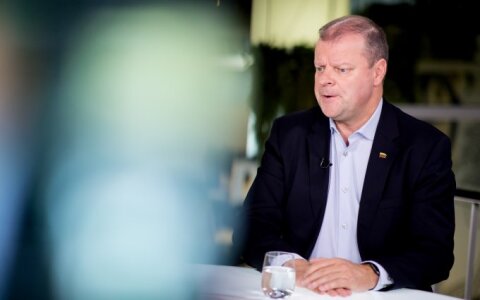 Lawmakers who left the opposition Lithuanian Farmers and Greens Unions have announced they are establishing a new political party, Democratic Party "For Lithuania".

Skvernelis, who also leads the group in the parliament, says the newly-established party will be a center political force with "state management experience and capable of taking responsibility for the country's present and future".

"We have only recently established ourselves as a new group in the Seimas, but we already feel people's support and we have received a lot of letters from cities' and regional representatives who see the existing complicated situation in Lithuania and want to join us for common work. We see the party format as a possibility for everyone to pool a wide circle of like-minded people," Skvernelis was quoted as saying in the group's statement.

In Lithuania, at least 2,000 founding members are needed to establish a political party.

The new party vows to fight poverty in Lithuania, strengthen families and the country's economy, focusing on the creation of high-quality and high-added-value jobs, as well as by making state management more efficient, as well as to give more powers to local authorities during the resolution of crises, to fight corruption and to implement a green course policy.

Skvernelis and the other lawmakers left the LFGU in September and founded the political group of Democrats "For Lithuania", stating that he and his allies left the group as he did not take part in "dividing and conflict-causing politics".

Skvernelis led Lithuania's previous government that was formed by the LGHU and its coalition partners.