Plans to move Zappa's monument in Vilnius cause stir 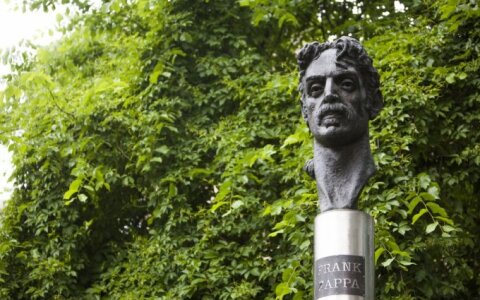 Plans to move a monument to singer Frank Zappa in central Vilnius from a square named after him to free up the space for the construction of the nearby policlinic's new extension has angered the monuments' initiators.

Representatives for the Vilnius authorities say, however, the project will still be adjusted to preserve respect for Zappa and preserve the public space for city residents.

Saulius Paukstys, one of the initiators of the monument of Zappa, plans to submit a petition with 500 signatures to Vilnius City Municipality on Thursday afternoon, calling on the city authorities to change the project and to preserve the square and for the "monument to Frank Zappa who has become a Vilnius legend not to be moved from the existing place".

Speaking with BNS, Vilnius chief architect Mindaugas Pakalnis assured that the project would be adjusted and would no longer include a planned car park instead of the square, adding that the project's authors would have to plan "a new identity" for Zappa's square.

The privately-funded sculpture to Zappa was installed in Vilnius in 1995 by enthusiasts. On the initiative of the same club of Zappa's fans, created by Paukstys and Saulius Pilinkus, a monument for Zappa was also built in Baltimore, US.

Plans to move Zappa's monument in Vilnius cause stir