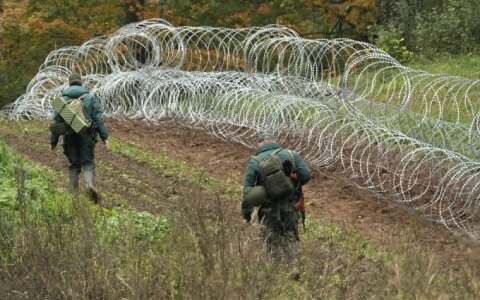 Twelve European Union’s (EU) interior ministers have sent a joint letter to the European Commission calling to accelerate EU changes in the areas of external border protection and migration.

In the letter, which was sent at the initiative of Lithuanian Interior Minister Agne Bilotaite, the ministers emphasized the necessity to strengthen protection of the Union’s external borders, to ensure resistance of the Union’s asylum policy to abuse on the part of non-democratic regimes, and to provide EU funding for the erection of a physical barrier at the border with Belarus, the Ministry of the Interior said in a press release on Friday.

The EU Justice and Home Affairs Council will also discuss specific measures to counter the illegal migration crisis during a meeting in Luxembourg on Friday.

“… We are faced with a phenomenal hybrid attack organized by the Belarusian regime but this crisis has proved once again that we are able to focus in our search for effective solutions. Immediately after the onset of the migration crisis, we received full support from EU countries, including expert, financial and humanitarian assistance. I believe that, having joined forces, we will also find swift political solutions, which are expected from us by people in Lithuania and all across Europe,” the press release quoted Bilotaite as saying.

In the letter, the ministers welcomed the Commission’s decision to consider strengthening the EU’s legal framework and to add operational, legal, diplomatic and financial tools, that would allow to respond and prevent illegal migration, to the recently presented EU action plan.

The ministers also stressed the need for swift and concrete solutions at the EU level that would help counter illegal migration and other hybrid threats.

To ensure the integrity and normal functioning of the Schengen area, all external borders of the Union had to be protected with the maximum level of security, the letter said.

Therefore, it was necessary to add clear rules, as to what actions might be taken by member states in cases of illegal migration and other hybrid threats, to the Schengen Borders Code, the ministers pointed out.

They also pointed to the need in “additional and adequate funding from the EU budget” for the installation of a physical barrier “as a measure for protection of the EU external borders”.

In addition, the ministers called to consider further development of common standards of the EU border control and in particular of the external border surveillance.

Lithuania’s initiative and proposals on amendments to EU legislation that would enable member states to respond to threats to national security swiftly and proportionately, were drafted in September.

Lithuania, Latvia and Poland have faced a drastic increase in illegal migration from Belarus since summer. Nearly 4,200 migrants, mostly Iraqi citizens, have crossed into Lithuania from Belarus illegally so far this year.