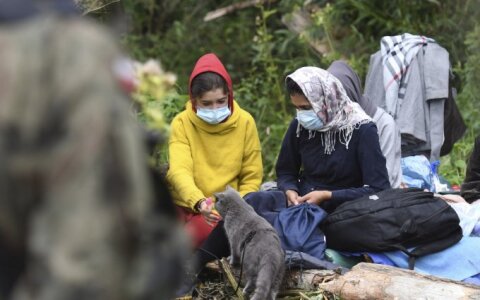 Lithuanian border guards have in the past 24 hours turned away 93 migrants attempting to cross into the country from Belarus illegally, and no migrants have been allowed in on humanitarian grounds.

Thursday's number of pushed-back people was the highest over the whole month of September. There were 54 such people on Wednesday, 63 on Tuesday and 17 on Monday, the State Border Guard Service (SBGS) said on Friday morning.

It also said the total number of migrants prevented from entering Lithuania over the past two months has exceeded 3,000 as 3,060 people have been prevented from crossing in from August 2.

On Thursday, migrants attempted to enter Lithuania from Belarus in Svencionys, Salcininkai and Lazdijai Districts. The biggest number of 86 migrants made attempts to cross into Lithuania in Lazdijai District where one group of 29 people was stopped.

The SBGS also reported that guns shots were heard on the Belarusian side near Druskininkai municipality on Thursday, just as the previous couple of days when various shots were heard. The shots are believed to have come from the nearby Gozha training area.

Lithuanian border guards and troops assisting them did not use their service guns, special measures or physical force over the past 24 hours.

Nearly 4,200 migrants, mostly Iraqi citizens, have crossed to Lithuania from Belarus illegally so far this year.

In a bid to stem the flow of migrants, Lithuania in early August introduced a policy of pushing migrants back over the border into Belarus.

Some 93 migrants turned away on Lithuania's border with Belarus