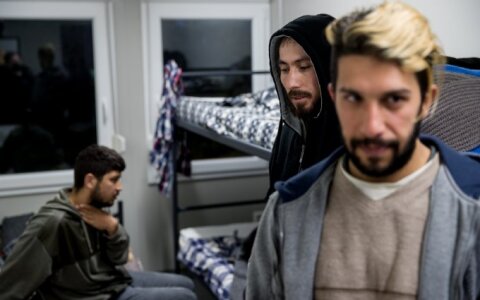 The European Court of Human Rights (ECHR) on Wednesday ruled not to extend the interim measures introduced in the case of five Afghan migrants against Lithuania.

The ECHR stated that the decision was made taking into account the fact that the mentioned Afghan citizens are now in the territory of Lithuanian and the government "have assured the Court that they will not be expelled from Lithuania until their asylum requests are examined".

It will be open to the applicants to lodge a fresh interim measure request with the court should the circumstances so require, the ECHR said.

The court also decided to declare the case file confidential to allow the applicants to remain anonymous.

In early September, the Strasbourg court introduced the interim measures in the case of the five Afghan migrants against Lithuania, barring the country from sending them away. This ruling expires on Thursday.

The court then said the applicants were Afghanistan citizens and they had arrived in Belarus in August and had since been repeatedly attempting to enter Lithuania to seek international protection.

"They allege that they fled Afghanistan because, as westernized and educated Afghan nationals, they are particularly vulnerable to Taliban reprisals," the court said.

The migrants were detained soon after the ruling. Lithuania's State Border Guards Service says they came from Belarus and then were pushed back. In the middle of September, border guards detained them again but this time they were allowed to lodge asylum requests.

Lithuanian then asked the ECHR to lift the interim measures.

The SBGS says it had no information that on the day of their detention on September 9, the Afghans were in the territory of Lithuania.

Asta Astrauskiene, the lawyer for the Afghan migrants, said they lived in a farmstead in Lithuania for some time and its owners helped the migrants to contact the lawyer. Later on, she said, when the Afghans met with border guards, they were pushed back into Belarus.

Over 4,100 migrants, from Middle Eastern and African countries have crossed into Lithuania from Belarus illegally so far this year. Vilnius accuses the Minsk regime of orchestrating the unprecedented migration influx, calling it "hybrid aggression".