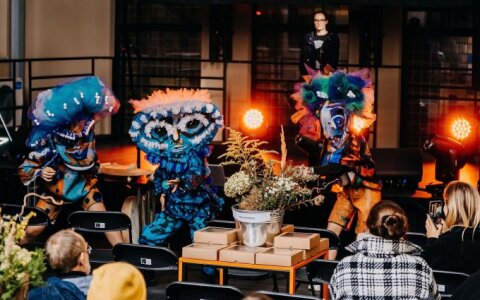 Next year’s European Capital of Culture (ECoC), Kaunas, has already caught the continent’s attention. On September 22–24, the team revealed a comprehensive programme for 2022 – the press conference was followed by a two-day forum full of captivating presentations, in-depth debates and artistic interventions. All of that helped to reveal the core ideas and values of the project and suggested 2022 will be one of the most successful years in the city’s history. An introduction to a new creative era, too. Once a temporary capital of a new state, today, Kaunas is ready to become a contemporary European capital.

‘I feel like five years ago when our team met the ECoC jury at the Ministry of Culture in Vilnius – we then promised the jury culture can make the much-needed change in people’s mindsets and help them better understand each other, as well as heal the city from its historical amnesia,’ Virginija Vitkienė, CEO of Kaunas 2022, reflected when opening the press conference ahead of the ECOC forum.

Related articles
All eyes on Kaunas: City revealed the European Capital of Culture 2022 programme
Kaunas 2022 will reveal its programme during special Forum

Partnerships that Enhance the Value of the City

‘Three years ago, we started the forum as an occasion and space to learn and get inspired from other cities, organisations, and innovators creating novelties in the cultural sphere. This year, it seemed more than natural after a few years of talking globally, we focus on Kaunas and speak in-depth about its programme’, Ana Kočegarova, Head of Programme at Kaunas 2022, opened the panel about the culture partnership programme. Kaunas 2022 accumulated around 80 partners that each helped shape the unique programme for next year.

‘An ECoC without helping hands is not ECoC’, Ana Kočegarova smiled. Among other partners that joined her on the stage was Gintarė Masteikaitė, culture manager, producer and head of ConTempo, the international performing arts festival making heads turn in Kaunas and Kaunas district since 2019. The culture professional believes ‘One of the key events initiated by Kaunas 2022 reveals the potential of performing arts and what we can do together; also, it supports independent artists who live here, or who left city and country and are now coming back. In general, art is a great tool to bring the world to Kaunas and Kaunas to the world."

Memory Office, one of the founding branches of Kaunas 2022, kicked off its session with guided tours in two of the most multi-layered areas of Kaunas, history-wise. During the walks, the programme’s curators presented the site-specific artworks initiated by the Memory Office that all prove the language of art as a way to tell the stories of people is a tool much more potent than pure facts.

Next year, the Memory Office will present a comprehensive programme in three parts, starting in spring, to commemorate the 50th anniversary of the unrest in Kaunas that followed the self-immolation of a 19-year-old student Romas Kalanta in protest against the Soviet regime. The events of 1972 will be reviewed in two theatre performances. Later on, the fourth CityTelling festival will grow into a month-long event. In autumn, World Litvak Forum will gather many people who have their roots in Lithuania to discuss the painful past and a shared future.

Modernism for the Future is one of the most ambitious branches of Kaunas 2022, aiming at opening 360 interwar modernist architecture buildings in Kaunas and Kaunas district for visitors, ideas and events. The goal coincides with the architectural networks path to the UNESCO World Heritage List. Coincidentally or not, representatives of UNESCO attended the ECoC forum session held at the modernist auditorium of National M. K. Čiurlionis Museum of Art.

Within the framework of the Modernism for the Future programme, for more than five years and in various ways, cultural organisations, initiatives, architectural historians, and interdisciplinary art creators have been seeking inspiration in the city signs witnessing the birth of modern society, to tell Lithuania, Europe and the World. During the session, the programme’s partners revealed how Kaunas modernism can be Open and Accessible, Inclusive and Inspiring, Raising Awareness and Love to everyone for their future city.

Understanding Oneself and the World Through a Myth

Possibly the most exciting session of the ECoC forum in Kaunas was held in the confluence of Lithuania’s main rivers, Nemunas and Neris, which is often called the birthplace of the city. Rytis Zemkauskas, the curator of the Myth of Kaunas, stressed we are what we tell and invited everyone to control the chaos by telling a common story: ‘Narrative places a human being within the time-space. Narrative helps to deal with the fear of infinity, it establishes, comforts and protects; The European capital of culture is aimed to create a uniting network of many different narratives – The Great Myth’. So, will creating a new myth for the city help it change its path? The answer will unfold in next year’s great mythical trilogy comprised of the Uprising (January 22), Confluence (May 20), and Treaty (November 25–27).

All as one Before and After

From traditional music sounds and crafts that spread over the terrace of Kaunas Cultural Centre during one of the last sessions of the ECoC forum to brave examples of contemporary art – all of the above is nurtured in the playground of the Kaunas 2022 community programme. Spanning through the numerous neighbourhoods of Kaunasand Kaunas district, the programme aims at revealing the multi-layered face of the region, combined from varied yet all significant features, legends, beliefs and wishes.

Celebrating the spirit of communion and co-creation are two of the key goals of Kaunas 2022. During the past five years, the activities brought impressive results: 1,300 cultural and artistic activities were organised, more than 18,000 participants took part, and more than 55,000 viewers enjoyed the content. More than 350 foreign and Lithuanian artists contributed to implementing the activities, and more than 70 long-term works of art were created. ‘The greatest outcome of value is a community that is curious and initiates changes in its living environment’, believe the programme’s curators. During the session, emotional stories about personal journeys were shared. Everyone was invited to set off on a journey through the co-created wonders of Kaunas and Kaunas district next year.

From audience development to a greener city, design as a tool is critical in every single aspect of Kaunas 2022. Design for Happiness, a programme striving for an accessible, happy and sustainable city, has been incorporated in the main idea since Kaunas started getting ready to become an ECoC.

‘It was clear ever since we started preparing the bid that we want Kaunas to be not only a city of modernist architecture but also a city of contemporary design,’ said Virginija Vitkienė, CEO of Kaunas 2022, when opening the session on Friday morning.

Together with partners, Virginija Vitkienė presented a lush tree of activities of Design for Happiness for those attending the event and watching the broadcast. The tools include a new accessibility guide for cultural institutions looking for new audiences, an old industrial ship in river Nemunas currently converted to an art hub, a successful collaboration with Kaunas’ fellow city in the UNESCO Creative Cities network, Kortrijk in Belgium, an overwhelmingly inspiring landscape design festival, the International Happiness Day and upcycling as a tool for creating sustainable fashion.

It would be very incorrect to say only professional artists and culture operators helped shape Kaunas 2022. The young generation of Kaunasians has been included in the path since the very start, with the help of the Rising Kaunas programme, offering creative mentorships and workshops for high school students. The changes in the mindsets of the next generation were creatively and at the same time carefully transformed into the events of the programme of Kaunas 2022, highlights of which were revealed in the final session of the ECoC forum. Started with the rhythms of trap music, the event included personal growth stories, alternative initiatives and big future plans.

Next year, Rising Kaunas will host the largest contemporary city festival ‘Audra”’ (Storm), based on the principles of co-creation and coined in cooperation with dozens of young producers, curators and the music club Lizdas. What happens next? The people Rising Kaunas will definitely come back in 2023 and the years to come.

Hundreds of participants from across Europe attended the forum events, including representatives of former and future ECoCs, various institutions of art and culture and the press. Thousands of viewers watched the broadcast online – both real and virtual reactions became a true inspiration for the team of Kaunas 2022’. Video recordings of the presentations and the press conference are all available online on YouTube and Facebook.

Lithuania’s second-largest city Kaunas and the surrounding Kaunas district are ready to become one big European stage next year. The programme of Kaunas 2022 includes at least 40 festivals, over 60 exhibitions, more than 250 stage events (50+ world premieres!), and a number of concerts exceeding 250. The grand opening of ECoC is scheduled for January 22, 2022.