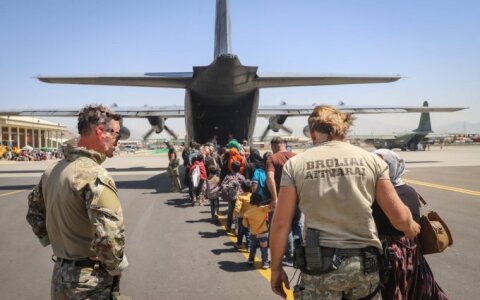 Lithuania is ready to take in up to 30 people who assisted NATO's mission in Afghanistan, in addition to around 180 Afghan interpreters and their family members who have already come to the country, Deividas Matulionis, Vilnius' ambassador to NATO, said on Thursday.

The Lithuanian government's Migration Commission has made such a commitment, according to the diplomat.

"The Migration Commission's decision is in force: we are committed to take over up to 30 persons who worked in Afghanistan, specifically for the NATO mission," Matulionis told BNS, adding that the list of countries ready to accept Afghans "is filling up".

"Canada, other countries are taking in a lot of them," he said. "Some 800 Afghans are now in Kosovo and 150 in Poland, and we had declared that we were ready to take in [Afghans] from Poland."

The migrants are being distributed among NATO member countries, so "there is no big pressure [...] from partners" to accept them, according to Matulionis.

All the migrants have been screened for security and are "one of the safest groups", but Lithuania will still be able to carry out additional checks before accepting them, the ambassador said, adding that it "would not be a problem" for Lithuania to take in not only some of the Afghans from Poland but also from Kosovo.

The Alfa.lt online news site was the first to report about the decision to accept up to 30 more Afghans on Thursday.

Evelina Gudzinskaite, director of the Lithuanian Migration Department, confirmed to BNS on Wednesday that Lithuania had already granted asylum to 167 Afghans, with the decision on asylum claims by another 11 people still pending.

Around 180 Afghan interpreters and their family members who had worked for the Lithuania contingent were evacuated to Lithuania in August following the Taliban's seizure of control of their country.

Most of the evacuated Afghan nationals now live in Lithuania's western town of Raseiniai, and some of them live in Vilnius.