4 out of 10 people would get booster shots against coronavirus 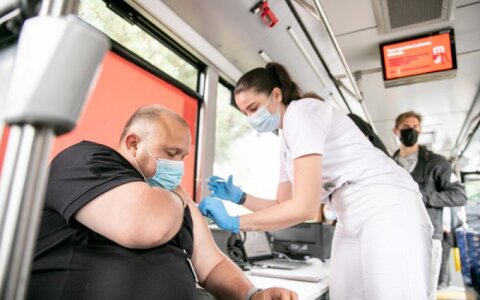 Some 42.4 percent of adults in Lithuania would get booster shots against the coronavirus, which is lower than the existing number of people vaccinated with at least one doze, a new survey by Vilmorus for BNS shows.

According to Vladas Gaidys, head of Vilmorus, once the share of vaccinated people is taken into account, one can say over half of the population would get booster shots.

"If we consider those who have been vaccinated as inclined to get the third shot, then we have more than a half – around 52 percent from those who are vaccinated," Gaidys told BNS.

Nevertheless, he paid attention to the fact that this survey rather shows a tendency as respondents were not asked whether they had been vaccinated but could pick their answer from four options.

The share of respondents who said they had not been vaccinated is smaller than the share of non-vaccinated people in the general population.

It can be explained by the fact that the most passive share of the population is hard to reach during such surveys, Gaidys said, adding that it stands true not only when asking people about vaccination but also about whether they plan to cast their votes in elections.

Professor Aurelija Zvirbliene from Vilnius University's Institute of Biotechnology, says uncertainty might be causing public doubts on booster shots as it's not clear right now whether such shots will be recommended for everyone and when.

"When we started vaccinating people, people were mostly told about two dozes or one doze in the Johnson & Johnson case, and I can understand that some people might feel as if tricked that they were told one thing, and now they are being told the other," the professor said.

Zvirbliene hopes the percentage of people with favorable views on booster shots will rise once more people who have received them increased and they will become a more common and known thing.

"Younger people who might need revaccination, probably later, will see the example of older people and will accept this issue more easily. So I think the result we have now will not necessarily be like that once we start revaccination as sometimes the fear is just caused by a new, untried thing," she said.

To make sure in the future that people maintain that immunization, it’s important to understand what makes that fifth of undecided respondents doubt, Zvirbliene said. "It shows that those people are not against but probably need more information," the professor said.

The question: The government has announced plans to provide an opportunity in the fall for the population to get booster shots against COVID-19. Will you or will you not get the booster shot?

4 out of 10 people would get booster shots against coronavirus