Lithuania and Poland to seek EU funding for border fence 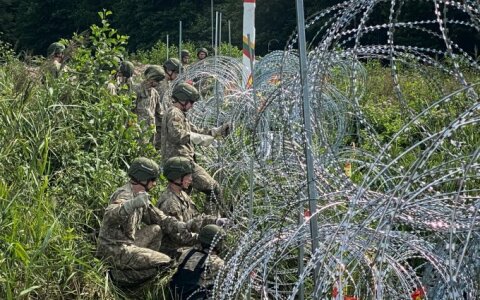 Lithuania and Poland will seek EU funding for the construction of a fence on the border with Belarus, the Lithuanian Interior Ministry has said.

Lithuanian Interior Minister Agne Bilotaite and Bartosz Grodecki, undersecretary of state at the Polish Ministry of Interior and Administration, agreed on this during their meeting in Vilnius on Thursday.

"Both sides unanimously agreed that it is necessary to seek EU funding for the construction of the fence, as well as faster decisions on changes to EU border protection and migration legislation," the Lithuanian ministry said in a press release after the meeting.

Both Lithuania and Poland have decided to erect a physical barrier on their borders with Belarus amid a surge of migrants trying to cross in from the neighboring country.

EU officials have said repeatedly that the European Commission only finances certain security measures, such as the installation of a surveillance system, but the bloc's existing legislation does not provide for funding a physical barrier.

Bilotaite and Grodecki also agreed to continue cooperation and to present a common Lithuanian-Polish position on human rights and illegal migration in different EU formats.

"Illegal migration is not acceptable in the European Union, especially when it comes to chaotic and illegal border crossings from neighboring countries that are not facing war or other threats," Bilotaite said in the press release. "We will seek changes in EU law because countries need to have the means to protect their national interests".

"Lithuania has worked out a package of proposals and together with Poland, Estonia and Latvia, we are working to bring about change and we are already mobilizing a broader alliance of EU countries to do so," she said.

"Together with Poland, we will also seek to draw the attention of the international community to the root cause of this situation – actions by the Belarusian regime and the human rights situation in Belarus."

Grodecki underlined that Lithuania and Poland have an obligation to protect not only their national borders, but also the EU's external borders.

"Belarus is not a natural migration route; it is an organized human smuggling scheme," he said. "We are witnessing an attack of disinformation and migrants are also being tricked into thinking they can easily reach the EU."

Bilotaite said that Lithuania has put up 32 kilometers of concertina wire along its border with Belarus and continues work on the physical barrier, which it expects to complete in a year's time.

On Friday, Vilnius is hosting a meeting of the Lithuanian-Polish Intergovernmental Commission for Cross-Border Cooperation.

These are regular meetings of Lithuanian and Polish officials to discuss issues of cross-border cooperation, protection and rescue of the population in emergency situations, territorial planning and interregional cooperation.

Lithuania and Poland to seek EU funding for border fence