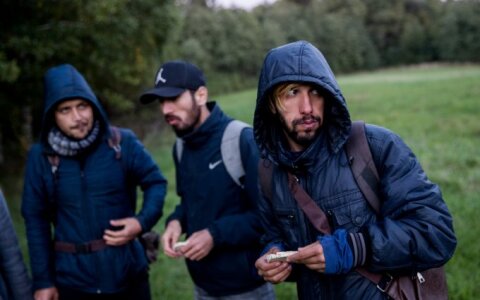 Lithuania provides the possibility as of Wednesday to lodge asylum requests at its embassy in Belarus, based on an order signed on Tuesday by National Defense Minister Arvydas Anusauskas who is currently also substituting for Foreign Minister Gabrielius Landsbergis.

Up until now, illegal migrants attempting to cross in Lithuania from Belarus and pushed back by border guards were told to ask for asylum at border checkpoints.

"Foreigners' asylum requests can be lodged at the Embassy of the Republic of Lithuania in the Republic of Belarus," according to the document that came into force on Wednesday.

The possibility to lodge asylum requests at Lithuania's diplomatic representations are provided for in the Law on the Legal Status of Aliens, amended on August 10, but the provision was not applicable in reality until the Foreign Ministry adopted a relevant by-law.

Interior Vice Minister Arnoldas Abramavicius said earlier there had been no cases of asylum requests lodged at border checkpoints, linking it with actions of Belarusian officers.

"The Belarusian authorities or border services simply do not allow them through border checkpoints. One thing is that they need to have ID documents. The other thing is that in that case, the regime would show that they are the cause of the illegal migration," he said.

Lithuania introduced push-backs in early August in response to a spike in illegal migrants entering the country's territory from Belarus. Around 2,200 people have been pushed back since then and around 80 people have been allowed to enter Lithuania, according to the Interior Ministry and the State Border Guard Service.

More than 4,100 illegal migrants have crossed into Lithuania from Belarus so far this year, mostly Iraqis. Vilnius is accusing the Minsk regime of orchestrating the inflow of illegal migrants, calling it a hybrid attack and forced to declare a state-level extreme situation.