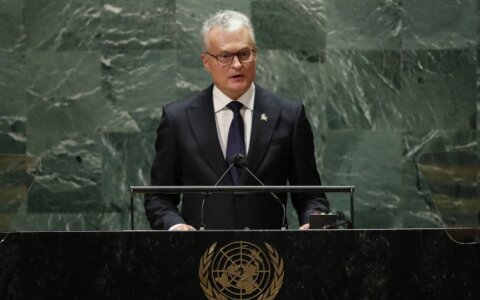 Lithuanian President Gitanas Nauseda has called on the United Nation to help to resolve the ongoing illegal migration crisis on the Lithuanian-Belarusian border, fueled by the Minsk regime.

Speaking at the UN General Assembly on Tuesday, the president once again called the recent influx of migrants a hybrid attack.

"For several months now, Lithuania has been dealing with an unprecedented hybrid attack. By artificially creating and directing flows of irregular migration, Belarus aims to put political pressure on the European Union. Lithuania firmly rejects this attempt at sowing discord and calls on the United Nations to address it," Nauseda said.

The Lithuanian president also stressed the importance of solidarity in all countries.

"We all need to actively fight human trafficking, break the business model of smugglers, and discourage migrants from endangering their lives. There must be serious discussions on how to prevent a country to use irregular migration to pressure another country. We must make it clear that people should not be used as tools," the Lithuanian president said.

Over 4,000 illegal migrants from Middle Eastern and African countries have entered Lithuania from Belarus so far this year, forcing Lithuania to declare a state-level extreme situation.

The Lithuanian president also pointed out that the presidential election in the neighboring country when Alexander Lukashenko was declared the winner were rigged, adding that any attempts to unite civil society are being suppressed by force.

In his speech, Nauseda also raised the issue of the ongoing annexation of Crimea, calling on the international community to reinforce the policy of non-recognition and defend the rights of local residents.