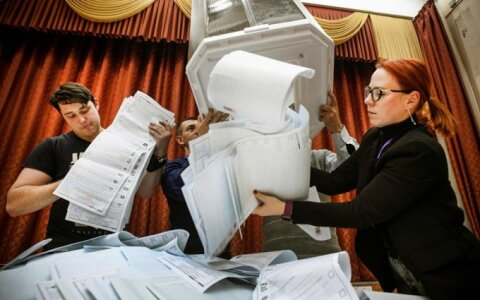 VILNIUS, Sep 20, BNS – The State Duma elections took place "in the context of restrictions on civil and political rights", the Lithuanian Foreign Ministry said on Monday in a statement on Russia's parliamentary vote that ended on Sunday.

"This has further deteriorated political pluralism in Russia and possibilities for the people of Russia to express their civil position freely."

The ministry also "regrets that the constraints, put by Russian authorities under the pretext of the epidemiological situation in the country, did not allow the participation of international observers from the Organization for Security and Co-operation in Europe (OSCE) in the elections".

"All these actions demonstrate Russia's distancing from democratic principles and cast a shadow of doubt on the transparency of the elections," it said.

The ruling United Russia party on Monday claimed a two-thirds majority in the State Duma. The opposition calls the elections fraudulent.

With 85 percent of votes counted on Monday, United Russia was ahead with 49.76 percent of the vote, followed by the Communist Party with 19.61 percent.