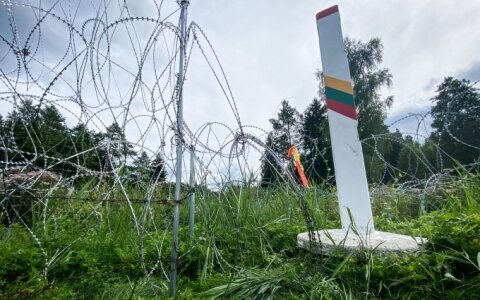 100 km of barbed wire concertina can be installed on the Lithuanian-Belarusian this year, Lithuanian Prime Minister Ingrida Simonyte says.

"That riskiest section, which is about 100 km, where it’s the easiest to get into the country and which is causing the biggest tensions for our services, it can be fully completed, meaning both the concertina and the physical barrier, based on our plans, in early spring next year, but next year the focus would be more on the finishing touches," the prime minister said during the Government Hour in the parliament on Thursday.

Interior Minister Agne Bilotaite says some 25 km of concertina have been already installed on the border.

The prime minister says the work needs to be stepped up, and the interior minister said talks are underway with the National Defense Ministry on the deployment of additional human resources for this work.