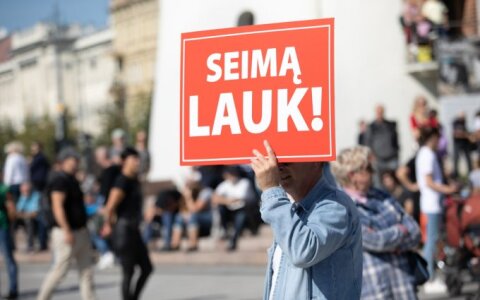 Police said they detained two people during Friday's rally in Vilnius' central Katedros Square, adding that one of them had "pyrotechnic devices".

"Officers took away two persons, one of whom had pyrotechnic devices," Saulius Gagas, the Vilnius county police chief, told reporters. "What devices these are yet to be established."

Gagas said the persons had been taken to the courtyard of the nearby Interior Ministry for questioning.

Gagas said that no other incidents had been recorded at the rally so far.

Vilnius Municipality authorized the rally to take place in Katedros Square between 10:30 a.m. and 4 p.m.

The Lithuanian Family Movement, the organizer of the rally, has called on participants to obey the law and protest peacefully.

Some sections of Gediminas Avenue were closed because of the rally, with more than a dozen police crews on duty near the square and outside the government and parliament buildings.