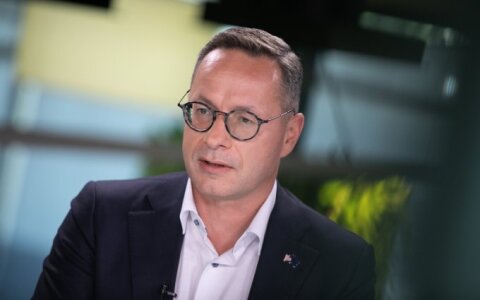 Lithuania's parliamentary Committee on Foreign Affairs on Thursday expressed its support to the actions of the Lithuanian Government with respect to China.

“I think Lithuania will benefit from these sanctions, as can be seen from the example of the Czech Republic,” he told reporters.

“We will bring together the entire transatlantic democratic community, which supports us politically at present. But now we will turn that political support into very specific financial, economic and other instruments,” Pavilionis said.

He also voiced support to the initiative of President Gitanas Nauseda for a 27+1 format of economic and political cooperation in relations with China.

“That support, which is being provided to us or may be provided by the United States, Taiwan and other countries, is even potentially more substantial than potential damage, which is actually very small, judging from the data provided by our business representations,” Pavilionis said.

He mentioned the example of the Czech Republic when China imposed sanctions against that country after a visit paid by a delegation of the Czech Senate to Taiwan.

“Do you know what are the consequences of those sanctions today? Taiwan created 24,000 jobs in the Czech Republic during the period of sanctions as opposed to 5,000 jobs created by China,” the committee’s chairman pointed out.

He nonetheless admitted that some Lithuanian businesses had encountered difficulties with exports to China.

In October, the European Union (EU) should complete a mechanism of response to sanctions imposed by non-democratic countries against EU Member States, Pavilionis said.

“It is a very big mistake for China to think that will manage to force Lithuania to change its stance with such measures,” he added.

In May, Lithuania said it was leaving China's 17+1 cooperation forum with Central and Eastern European, calling the format "divisive".

Relations between Vilnius and Beijing worsened further following the announcement of plans to open Taiwan's representative office in Lithuania.

Beijing, which regards Taiwan as a rebellious province, then recalled its ambassador to Lithuania for consultations, urging Vilnius to follow the "One-China principle".

Washington has backed Vilnius in its diplomatic rift with Beijing.