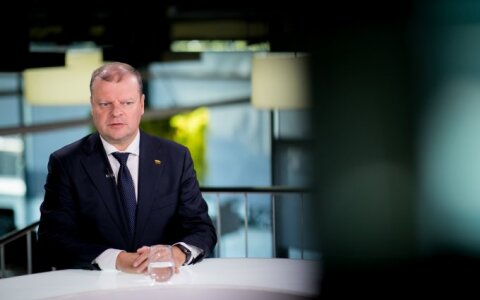 Saulius Skvernelis, a former prime minister of Lithuania, and nine other parliamentarians have left the Farmers and Greens Union's (LFGU) political group in the Seimas to form a new group.

Several MPs from the non-attached group are also expected to join the new Democratic parliamentary group.

"The new group [...] will be registered as soon as the autumn session opens. It will be named "the Democratic Group in the Name of Lithuania," Linas Kukuraitis, former social security and labor minister, told a press conference on Tuesday.

The 13-member group is ready to work as "a constructive opposition", according to Kukuraitis.

The Farms and Greens' group will have 22 members following the withdrawal of the 10 MPs.

MP Baskiene, a long-standing member of the LFGU, said she was leaving the party, too.

"What we see today in Lithuania is a polarized, divided nation, a situation that unfortunately benefits a large number of politicians," Skvernelis said. "After long deliberations, my colleagues and I have decided that we do not want to be part of the politics of division and polarization."

"The new group is not a split-off or artificial political formation; this the bringing together of partners and like-minded people," he said. "As Linas [Kukuraitis] has already mentioned, we will act as a constructive opposition to the current government."

When asked whether members of the new group would create a new political force ahead of the next election, Skvernelis said it was a premature question.

He said the new group would elect their head shortly, adding that the post would rotate every session.

Skvernelis hinted after last month's riot outside the parliament building that he had might leave the LFGU's parliamentary group due to "uncompromising differences" between some of its members.

The Farmers and Greens were "a dignified, solid political force with responsibility for the government" when they were in power, but things changed when they became an opposition party, according to him.

Lukas Savickas, a former advisor to Skvernelis, also said after the riot that he was leaving the LFGU group.

Skvernelis, who is not a member of any political party, was appointed prime minister after the Farmers and Greens won the 2016 parliamentary election and stayed in the post until December 2020. He ran for parliament on the LFGU ticket last year, too.