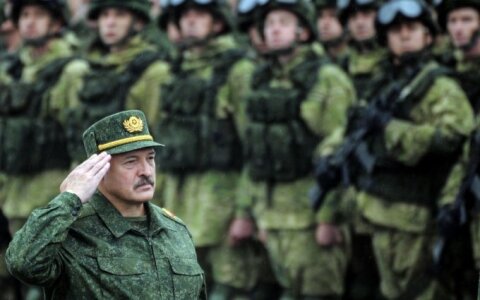 He also said he could not comment on Polish media reports that had not been confirmed by any official sources.

“I don’t know the source of that information, therefore, I cannot consider it as information. In my view, that article reflects a trend of disinformation reports showing up in our information space in one or another way,” he added.

The minister stressed that Lithuania and NATO were capable of identifying “provocations, disinformation and refraining from getting involved in the games of the other party”.

“In particular when there are attempts to manipulate people’s fears. I’d call not to be intimidated,” Anusauskas said.

The minister said that “more” fake news might be expected during the Zapad manoeuvres. He also reiterated that Lithuania was ready to counter the threats related to those exercises.

“We have sufficient capabilities, we are strong and get more than ever support from our allies, we have analyzed a wide range of various scenarios and worked out our response plans,” he told BNS on Thursday.

The Dziennik Gazeta Prawna reported on Thursday citing unnamed sources that that Belarusian troops “might invade several kilometers into Lithuania” during the manoeuvres.

According to the Polish daily, NATO is preparing for such an eventuality constituting “a gross violation of Lithuania’s sovereignty”.

The daily said that Kremlin might thus attempt to test NATO’s limits with the use of Minsk.

The article described a scenario, in which Russia’s president Vladimir Putin would distance himself from such a provocation, if it were to take place, and would pretend that it was solely the initiative of Belarus. Moreover, he would propose to act as an intermediary in resolving the dispute.

The article also said that similar provocations might be organized near Belarus’ border with Poland.

The Zapad-2021 strategic manoeuvres will be held on September 10-16.