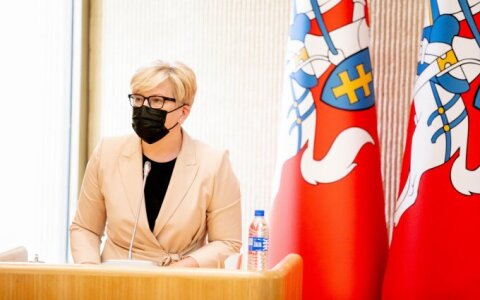 Lithuania’s Prime Minister Ingrida Simonyte has joined a joint call by women political leaders to current and future power holders in Afghanistan to refrain from violence against women and to uphold and advance the rights of girls and women in Afghanistan.

The call had been initiated by President of Slovakia Zuzana Čaputová and Prime Minister of Iceland Katrín Jakobsdóttir, the government’s press service said in a press release on Friday.

“We call on current and future power holders in Afghanistan to respect the rights of women and girls, and to refrain from any steps that would impede their rights in areas such as employment, education, access to healthcare, culture or public office,” the call said.

“We, women leaders, want to reassure Afghan women and girls that we will closely follow the developments in their country, listen to their voices, and continue to support their rights and opportunities.”

Following a lightning offensive across Afghanistan that saw many cities fall to the insurgents without a fight, the Taliban have sought to portray themselves as more moderate than when they imposed a strict form of Islamic rule in the late 1990s.

However, older generations remember the Taliban’s previous rule, when they largely confined women to their homes, banned television and music, and held public executions.