Landsbergis calls for 27+1 format in EU's relations with China 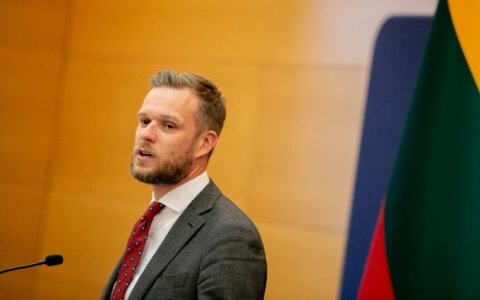 Lithuanian Foreign Minister Gabrielius Landsbergis on Friday called on the European Union to maintain the EU27-China format in the bloc's relations with Beijing.

"There is a need for a strategic assessment of relations with China. Individual member states’ agendas towards China do not strengthen the European Union’s agenda. If we act on our own and drop the EU27 format, we will lose on so many fronts," he said in a press release after an informal meeting of the bloc's foreign ministers.

He "also stressed that Lithuania saw the 27+1 format as the only possibility for a dialogue on an equal footing with Beijing", the Lithuanian Foreign Ministry said.

In May, Lithuania said it was leaving China's 17+1 cooperation forum with Central and Eastern European, calling the format "divisive".

At Friday's meeting, Landsbergis "informed his counterparts about the recent political, diplomatic and public relations pressures at a bilateral level from Beijing", according to the press release.

Lithuania's top diplomat underlined that "the EU must adhere to its values and principles".

"According to Lithuania's foreign minister, the EU must strengthen its economic resilience, reduce dependence on the Chinese trade and, following a proposal from the European Commission, immediately adopt the EU anti-coercion instrument."

"The EU must also coordinate China's policy with the like-minded in the Indo-Pacific region and beyond, as well as strengthen the EU-NATO cooperation on China policy issues."

Relations between Vilnius and Beijing have recently turned sour as Lithuania has begun to forge closer ties with Taiwan, which China regards as a rebellious province.

Last month, China recalled its ambassador to Vilnius for consultations over Lithuania's deepening ties with Taiwan, and demanded that Lithuania withdraw its envoy to Beijing.

China's Foreign Ministry then said the move came in response to plans to open Taiwan's representative office in Lithuania.

The ministry said in a statement that Vilnius' decision to allow Taiwan to open a representative office under its own name "brazenly violates the spirit of the communiqué on the establishment of diplomatic relations between China and Lithuania and severely undermines China's sovereignty and territorial integrity”.

In response, the Lithuanian Foreign Ministry said on Friday that it was recalling Diana Mickeviciene, the country's ambassador to China, for consultations.

US Secretary of State Antony Blinken, US Senate Foreign Relations Committee Chairman Robert Menendez and other Western politicians have expressed their support for Vilnius in its diplomatic row with Beijing.

Beijing has urged Lithuania to follow the "One-China principle" which means that both Taiwan and mainland China are inalienable parts of a single "China".

Landsbergis calls for 27+1 format in EU's relations with China