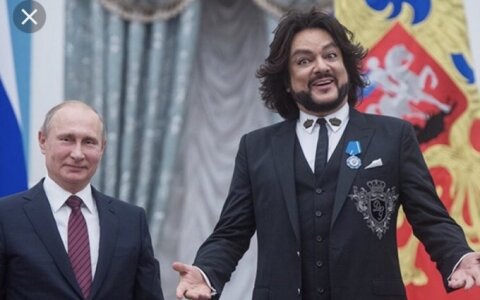 "The decision of the court of the first instance was upheld," Neringa Lukoseviciene, the supreme court's spokeswoman, told BNS.

The ruling is final and not subject to appeal.

The Russian performer appealed against the ruling, asking the court to overturn the ban.

The Vilnius court concluded that the Migration Department had grounds to consider Kirkorov's actions as a threat to national security.

"In its letter to the Migration Department, the Ministry of Foreign Affairs noted that Philipp Kirkorov was a popular Russian performer and producer who made an impact on ample layers of society in Russia and other countries of the former Soviet Union due to his active performance and organizational activities and that Russia’s officials openly described his performance activity in foreign countries as a tool for spreading the ‘soft power’ of the Russian Federation," the court said in a press release.

"He has been blacklisted in Ukraine and denied entry to this country due to these actions. In the ministry's view, Mr. Kirkorov's visits to Lithuania may pose a threat to the security of the Republic of Lithuania."

Having examined the appeal, the LVAT essentially upheld the first-instance court's conclusions and stated that "states have the right to control the entry and residence of aliens into their territory".

The Lithuanian law allows imposing an entry ban on a citizen of an EU member state and/or their family member or another person who enjoys the right of free movement under the EU's legislation for a period of up to five years only when their entry into and stay in the country "may represent a threat to national security or public policy", the court noted.

Kirkorov has dual citizenship of Russia and EU member Bulgaria.

"The applicant's behavior, his previous actions and the nature of these actions give grounds for the conclusion that the applicant does pose a threat to the security of the state," the LVAT said in a press release.

The court considers the Migration Department's decision to be "justified, proportionate and necessary" in order to prevent the entry into Lithuania of "a person whose presence is unwanted and deemed as posing a threat to national security".

Since the entry ban only applies in Lithuania, the right of Kirkorov as an EU citizen to move freely within the territory of other member states and perform there was not restricted by the contested decision, according to the LVAT.

Comparing his situation to that of other prominent Russian politicians and cultural figures who are not prohibited from entering Lithuania, the applicant argued that he was being discriminated against, it noted.

However, the LVAT concluded that the requirement of equal treatment had not been violated, stating that the Migration Department had taken account of the individual circumstances of the applicant when imposing the entry ban.

Foreign Minister Gabrielius Landsbergis then said that the well-known performer, during his multiple visits to the annexed Crimean Peninsula, "deliberately denied the territorial integrity and sovereignty of Ukraine and thus indirectly justified the aggressive actions of the Russian Federation".

Kirkorov's participation in concerts in Crimea "causes significant damage to the national security of Lithuania", according to the minister.