Firefighter fatally injured while installing fence at border with Belarus 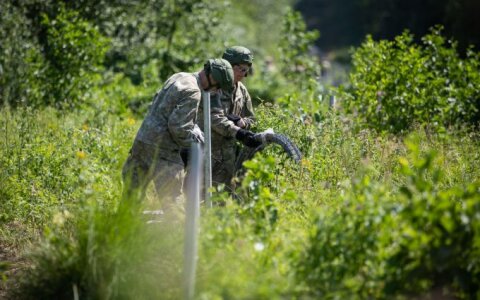 An officer of Lithuania’s Fire and Rescue Department was fatally injured at the border with Belarus on Tuesday, the Ministry of the Interior reported.

Egidijus Karla, 47, was injured during preparations to install concertina razor wire, the ministry said in a press release.

Paramedics called to the scene could not save the officer’s life.

“This came as a shock to all of us. The officer died while performing his duty, helping to strengthen the protection of the state border with Belarus. I extend my deepest sympathies to the victim’s family, friends and colleagues firefighters and wish the community of firefighters to stay strong and focused at this sad time,” the press release quoted Interior Minister Agne Bilotaite as saying.

Karla’s family would be given complete support, the minister added.

According to the ministry, the officer spent 25 years working as a rescuer firefighter and was diligent and honest.

Lithuania is building a physical barrier at its border with Belarus, which is being installed by the crews formed by the Lithuanian Armed Forces and the Fire and Rescue Department. Paramedics will be present at the site of works from now on, given the risks posed by razor wire.

Lithuania has decided to build the physical barrier at its border with Belarus following an unprecedented migration influx, which the country says is being orchestrated by the Belarusian regime.

Over 4,100 migrants have crossed into Lithuania from Belarus illegally so far this year, compared to just 81 in all of 2020.

Firefighter fatally injured while installing fence at border with Belarus