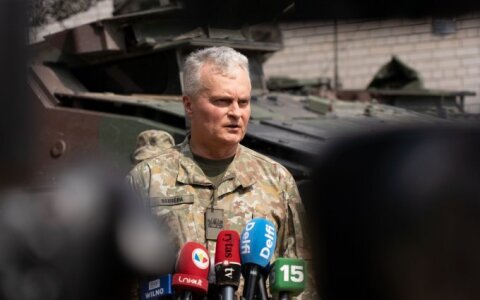 Lithuanian President Gitanas Nauseda has on Friday signed a decree giving additional powers to military personnel in border areas in case of an extreme situation.

"Taking the account the existing situation and the fact that the number of foreigners illegally crossing the border has risen tens of times this year, the president has decided to grant additional rights to military personnel, defined by law and letting them act in cooperation with officers of the State Border Guard Service and the Public Security Service to effectively manage the migration crisis," the presidential press service said in a statement.

On Thursday, the Lithuanian government asked the president to grant such additional powers and authorize troops patrolling the border with Belarus to give mandatory instructions to natural and legal persons, and prosecute and detain those who do not obey these orders, and those suspected of committing an offence.

The military will also be able to stop, check and inspect vehicles, persons and luggage, and use special equipment if necessary.

The parliament has recently passed a package of legislative amendments that allow calling up military units and granting them additional powers in an emergency situation in order to avert a serious threat to society.

Lithuania has a state-level extreme situation declared over the unprecedented migration influx which it says is being orchestrated by the Belarusian regime.

Troops are currently helping border guards to control the situation along the border.