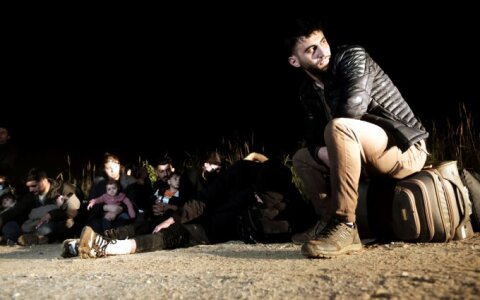 Having illegally crossed the Lithuanian-Belarusian border in June, the Iraqi citizen agreed to return to his country of origin under Lithuania's news voluntary return scheme. He had a ticket bought for him and also received 300 euros.

The man flew out of Vilnius to Istanbul.

Another around ten citizens of Iraq and other countries are also getting ready to return home voluntarily soon, the ministry said.

"We see a growing number of people who agree to leave voluntarily. Migrants who illegally crossed Lithuania, having not been granted asylum, will have to leave. If they cooperate and agree to return voluntarily, we provide such a possibility for them," Interior Minister Agne Bilotait said.

As of April, Lithuania's Migration Department has made 128 decisions not to grant asylum, mostly to Iraqi citizens.

Over 4,100 migrants – mostly Iraqi citizens – have crossed to Lithuania from Belarus illegally so far this year. Lithuania has a state-level extreme situation declared over the irregular migration influx which it says is being orchestrated by the Belarusian regime.