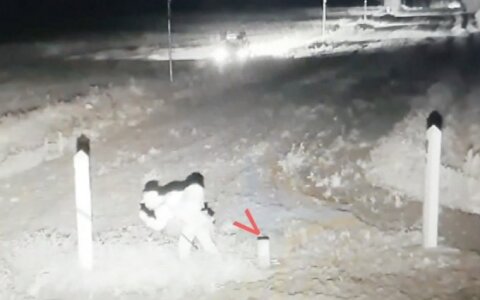 According to the service, the Belarusian border guard stepped around 1.5 meters into Lithuania's territory near the so-called Dieveniskes loop in Salcininkai District and then immediately went back.

"The Lithuanian SBGS views such behavior of the Belarusian officer as irresponsible and unprofessional," the service said in a statement.

A mobile border guard patrol was around 100 meters from the incident spot at the time.

The Belarusian border guard was alone and went back to the territory of his country after committing the violation. His equipment is also visible in the video as he had a matt on his shoulder and a sleeping back or a rolled-up poncho.

The SBGS has informed Lithuania's Interior and Foreign Affairs Ministries about the incident via the established channels.