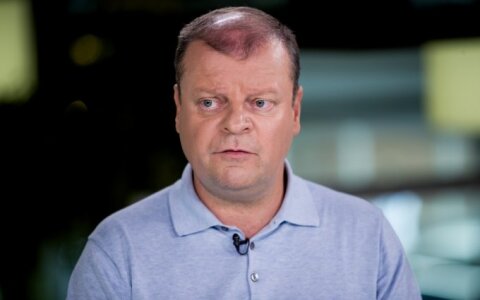 Saulius Skvernelis, the opposition leader in the Lithuanian parliament, has called the recent decision to allow Chinese company Nuctech to install an X-ray machine at Kena border crossing point on the Belarusian border strange.

Meanwhile, Laurynas Kasciunas, chairman of the parliamentary Committee on National Security and Defense, says it's a lesser evil.

"I cannot understand why such a decision was made," Skvernelis, Lithuania's ex-prime minister, told BNS on Thursday.

In his words, it's strange that the same company – Nuctech Warsaw – was earlier this year eliminated from Lithuanian Airports' baggage scanner tender over national security concerns and now it's been deemed good.

Kasciunas called the decision bad but added that, in his opinion, a bigger evil would have been not to have an X-ray machine at all.

"There was a bad and an even worse decision. We chose the bad one but it's better than the other option of not having the machine for another two years," Kasciunas told BNS.

According to Kasciunas, threats by authoritarian Belarusian President Alexander Lukashenko to flood Lithuania with "various dangerous things" are also forcing the country to install the X-ray machine as soon as possible.

No, definitely not. It's totally unrelated," Kasciunas told BNS.

On Thursday, the Polish unit of Nuctech, earlier this year eliminated from Lithuanian airports' baggage scanner tender over national security concerns, was allowed to install an X-ray machine at Kena border crossing point on the Belarusian border.

The Lithuanian government's special governmental commission vetting deals of importance to national security on Thursday issued a positive conclusion on the deal between Lithuania's Customs Department and Nuctech Warsaw.

Prime Minister Ingrida Simonyte said last week that the Kena crossing point on the border with Belarus needed an X-ray machine as soon as possible.

In February, the governmental commission decided that the planned airport scanner deal with Nuctech did not meet national security interests.

Nuctech then dismissed the national security concerns, saying that its equipment is produced in the Polish capital "under the strictest applicable EU and national performance and safety standards".

Critics say that Nuctech's "extreme low-level pricing strategy" suggests that its motives are not commercial but rather "an interest to control strategic EU infrastructure and data driven knowledge", according to the Wall Street Journal.