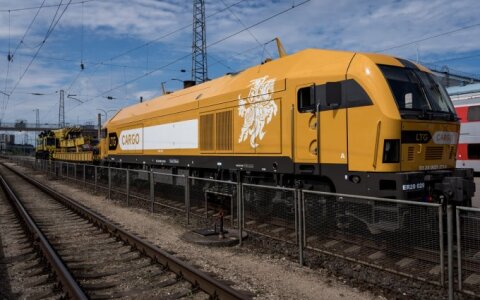 Lithuanian Transport Minister Marius Skuodis says he has indications that rising tensions between Vilnius and Beijing might lead to a drop in rail freight volumes from China.

At the same time, he pointed out that Lithuanian-Chinese economic ties are fairly weak.

"We have indications on the potential impact on rail freight volumes, but I would not want to elaborate. If we look in general, the ties are fairly weak, compared to other countries and those freight volumes within Lithuania," Skuodis told the Ziniu Radijas news radio on Thursday.

Mantas Bartuska, CEO of Lietuvos Gelezinkeliai (Lithuanian Railways), the country's state-owned railway company, says some trains going to Lithuania from China "might face problems", but they should be minor.

"So far, Chinese transit freight has been going successfully to Kaliningrad towards Germany, and the volumes are even growing. There are certain trains going to Lithuania that, we see, might face problems. There are certain obstacles but these are insignificant amounts," Bartuska told BNS.

On Tuesday, China recalled its ambassador to Vilnius and demanded that Lithuania withdraw its envoy to Beijing. China's Foreign Ministry said the decision came in response to plans to open a representative office under the name of Taiwan in Lithuania.

Several weeks ago, Taiwan announced plans to open a representative office in Vilnius under its own name by the end of the summer. Lithuania is also planning to open a trade office in Taiwan.