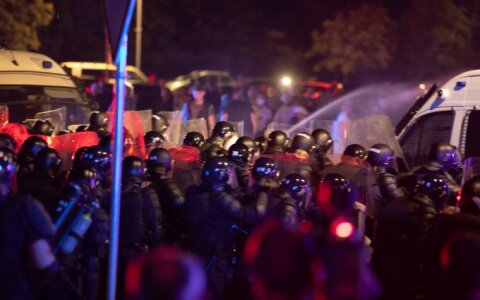 Tuesday's protest rally outside the parliament and a riot that broke out in the evening are "two different things", Asta Skaisgiryte, the Lithuanian president's chief foreign policy adviser, said on Thursday, calling the unrest "unjustifiable".

"These are two fundamentally different things," the advisor told LRT Radio. "Over 4,000 people took part in the protest, based on some estimates. They protested peacefully, expressed their convictions and dispersed when the rally ended."

"What happened afterwards in the evening [...] cannot be justified in any way," she added.

People have the right to voice their opinion to politicians, but "when one's opinion is expressed by throwing stones, it is completely intolerable", according to Skaisgiryte.

About 5,000 demonstrators gathered outside the parliament building on Tuesday for an authorized rally to protest against the government's plans to impose restrictions for people without coronavirus immunity or negative test results.

Related articles
Prosecutors seek arrest warrants for 26 suspects in riot case
Bilotaite: events outside parliament and in Rudninkai were coordinated

When the Seimas sitting ended, some protested blocked exits from the parliament and the driveway into the building's internal courtyard. As the police began pushing the protesters away, the crowd responded by throwing bottles and flares at officers. The police used teargas against protesters.

On the same day, a riot broke out at an irregular migrant camp set up in the Rudninkai military training area.

Skaisgiryte said Tuesday's riots had caused "great damage to our state," as they are already being used by unfriendly states for propaganda purposes.