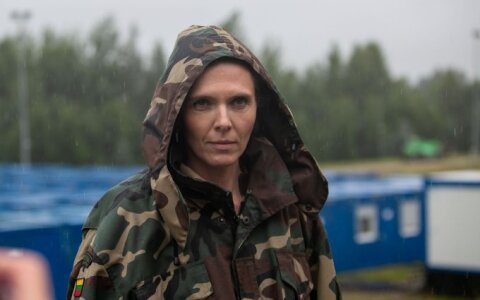 The humanitarian corridor for people fleeing Belarus from the regime's persecution will remain in place in Lithuania once it restricts the number of places where asylum requests will be accepted, Interior Minister Agne Bilotaite says.

"Illegal migrants who come with the assistance of Belarusian officers is one thing, and people who are fleeing from the regime is another thing. The humanitarian corridor will be ensured," she said in the country's parliament on Tuesday.

Under the proposed amendments to the Law on the Legal Status of Aliens, in case of the declaration of war, an emergency or extreme situation due to mass influx of foreigners, asylum requests can be submitted to the State Border Guard Service at border checkpoints or transit zones upon legal arrival to Lithuania, as well as to the Migration Department or Lithuania's diplomatic representations or consular establishments in foreign countries.

The bill also states that foreigners' asylum requests lodged in violation of the aforementioned procedure will not be accepted. The rules of submitting requests should be explained to foreigners.

Exemptions would apply to foreigners attributed to vulnerable groups or once individual circumstances are taken into account.

As the Belarusian regime launched a crackdown on peaceful protesters after the presidential election last year, Lithuania opened a humanitarian corridor for persecuted people and created facilitated conditions for Belarusian to come to Lithuania on humanitarian grounds.

"The humanitarian corridor has been open so far and will continue being so. We will ensure that with all possible means," Bilotaite said.