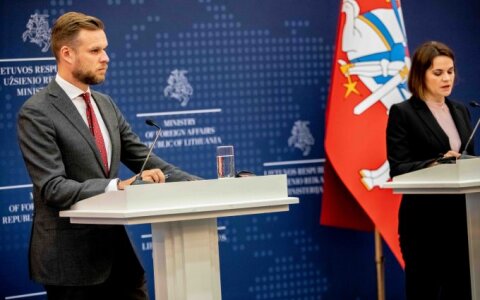 Lithuanian Foreign Minister Gabrielius Landsbergis has on Monday called on European Union to impose new sanctions for Belarus and not to recognize the decisions of the country's authoritarian President Alexander Lukashenko as one year since his re-election is marked.

"In spite of Lithuania's existing focus on the resolution of the migrant crisis, which is also linked to the Belarusian regime, we believe that pressure on the Belarusian regime should not be eased," Landsbergis told a joint press conference with Vilnius-based Belarusian opposition leader Sviatlana Tsikhanouskaya.

The international community should not recognize Lukashenko's international treaties, for example, agreements with Russia on their commonwealth, as well as amendments to the Belarusian Constitutions adopted during Lukashenko's rule.

Lithuania and other Western countries consider the presidential election in Belarus on August 9, 2020, when Lukashenko was re-elected for a new term, to have been rigged and they do not recognize it.

Tsikhanouskaya, who maintains she won the presidential election, was forced to flee Belarus and now lives in Lithuania. She told the joint press conference that the international community should remain consistent and promote a values-based foreign policy.

"I see Belarus is now in the process of revolution, but our neighbors are also suffering because of this," she said. "We have to be consistent on the ground and democratic countries should be consistent in their foreign policy."

Mass demonstrations in Belarus followed the re-election of Lukashenko, who has ruled Belarus since 1994. Force and representations against peaceful protesters followed and trials of protesters are still taking place in Belarus, with around 600 people deeded political prisoners.

The EU imposed several post-election packages of sanctions for Belarus. The latest economic restrictions were imposed in response to the diversion and force landing in Minsk by the Belarusian regime of a Ryanair plane, en route from Athens to Vilnius, to detain Belarusian opposition blogger Raman Pratasevich and his Russian citizen girlfriend.

Reminiscing these events, Tsikhanouskaya said: "In one year, the regime has gone from legitimate to terroristic".

She also thanked Lithuania for principles and "dedication to our common democratic values", despite the fact that Lithuania's support of Belarusian civil society led to the ongoing migrant crisis.

Landsbergis said he would not change anything that has happened over the past year while helping the people of Belarus.

"I am glad that Lithuania then stood up for people who love freedom, who want democracy, who want recognition that their dignity is important," the minister said.