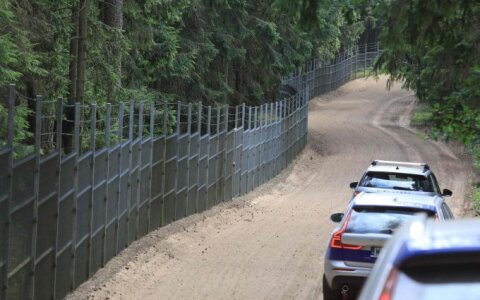 One of the companies of Lithuania's state-owned energy group Epso-G will be assigned to build a fence alongside the country's border with Belarus, Lithuanian Prime Minister Ingrida Simonyte confirmed on Thursday.

"Which company specifically will be chosen, we will announce that later, but that will be an energy sector company that could do that in the most practical way. We still need to discuss this but this decision has been agreed with the group that we will be looking for the most practical solution within the Epso-G group," the prime minister told a press conference on Thursday.

The latter CEO Gediminas Mazeika told BNS the company would be capable of implementing the fence project and has already been asked about technical solutions.

"We have not received any assignments regarding this project yet though," Antanas Bubnelis, spokesman for the Epso-G group told BNS.

Prime Minister Ingrida Simonyte said on Wednesday the government plans to approve necessary legislation for fence construction on Friday for them to be adopted during the Seimas' extraordinary session next week.

Lithuania's State Border Guard Service had proposed to erect a four-meter-high wire mesh fence with concertina barbed wire on top along the border with Belarus, estimated to cost more than 150 million euros in total.

To stem the inflow of illegal migrants entering from Belarus, the Lithuanian government plans to erect a 500-km fence along the Belarusian border.

So far this year, Lithuanian border guards have detained more than 4,000 migrants – mostly Iraqis – compared to 81 in the whole of 2020. A state-level extreme situation is in place in Lithuania because of the ongoing illegal migration crisis.

Lithuanian officials blame the Belarusian regime for the unprecedented migration influx, describing it as "hybrid aggression".