Head of SBG: state of emergency would limit access for migrant carriers 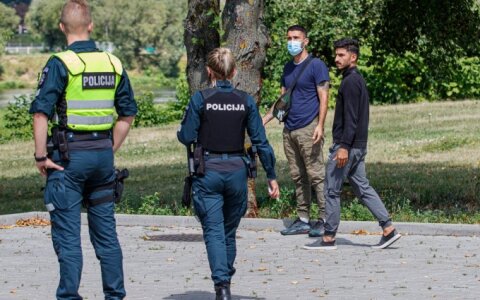 A state of emergency in borderline municipalities would create conditions for officers to better control the situation on the border and would limit access to the borderline zone for persons engaged in the transportation of illegal migrants, says Rustamas Liubajevas, chief of Lithuania's State Border Guard Service.

"If we speak about a state of emergency, I would probably look into that situation from the SBGS perspective. As we have a fairly complicated situation on the state border, we would like to limit access to the borderline stretch, to the borderline zone, for persons since this is where those actions are taking place," he told the national TV LRT's program Dienos Tema (The Topic of the Day) on Tuesday.

"I am speaking about those EU citizens who come to the borderline zone, to frontier stations where illegal migrants are now accommodated. These are the people who try to take those persons from the territory of the Republic of Lithuania or try to organize that. First of all, I am speaking about those citizens of EU countries or third countries who have permits to live in EU countries," the SBGS commander explained, adding that he also had in mind people who come from within the territory of the Republic of Lithuania.

Last week, the Interior Ministry said it had proposed to consider declaring a state of emergency in municipalities bordering Belarus, but no such decision has been made yet and it's unclear when it could be made.

The Interior Ministry believes a state of emergency would allow taking necessary action more swiftly, would simplify procurement procedures, the involvement of the army and the use of other measures.

Head of SBG: state of emergency would limit access for migrant carriers