Tens of irregular migrants detained and turned back at border overnight 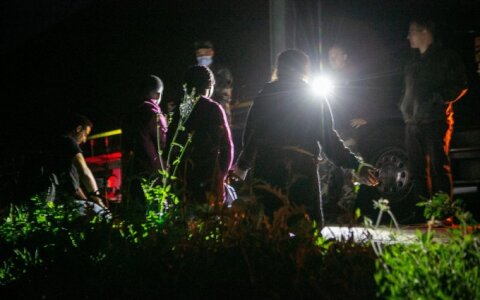 A number of such cases were recorded in the districts of Svencionys, Salcininkai and Ignalina, he told LRT Radio.

Rokas Pukinskas, a spokesman for the State Border Guard Service (VSAT), told the Delfi online news site that several groups of irregular migrants had been turned back, with the military police and sniff dogs involved in some of the cases.

The Interior Ministry said on its Facebook page on Tuesday that it had evidence that "Belarusian officials are involved in organizing illegal migration."

"On Sunday, a group of irregular migrants was recorded in Salcininkai District from a Frontex helicopter involved in the operation. [The group] was escorted by a service car and persons aboard it," according to the post.

Related articles
Illegal migrants will be pushed back, diverted to border checkpoints  (1)
Lithuania to offer money to migrants who want to return home  (1)

"Vehicles of this model are used by officials of Belarus' State Border Committee," the ministry added.

On Monday, Interior Minister Agne Bilotaite signed a decree allowing border guards to turn irregular migrants arriving in Lithuania back and direct them to border checkpoints or diplomatic representations.

Commenting on the move, Bilotaite told a LRT TV program on Monday evening that turning back migrants is allowed under international law if the decision is temporary and if migrants are offered an alternative option to apply for asylum.

Over 4,000 irregular migrants have been detained in Lithuania this year so far.

Lithuania has declared a state-level extreme situation over the growing migration influx which it says is being orchestrated by the Belarusian regime.

Tens of irregular migrants detained and turned back at border overnight