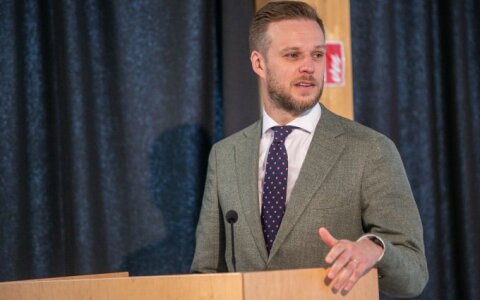 New EU-level sanctions against Minsk have been proposed, by they will be irrelevant if Minsk stops organizing illegal migration, Lithuanian Foreign Minister Gabrielius Landsbergis said on Friday.

However, if the neighboring country takes no action, Lithuania will trigger the issue of bloc-wide sanctions, he added.

"No sanctions are currently in place against Belarus for organizing illegal migration," Lithuania's top diplomat told BNS in a comment. "[Sanctions] have been proposed, but they would be meaningless if Minsk stopped this activity violating any international norms and agreements."

"If Belarus continues to encourage human smuggling, Lithuania will raise the issue of additional sanctions against Belarus in Brussels," he added.

In a Facebook post on Thursday, Landsbergis underlined the EU's role in dealing with the growing migrant crisis that Lithuania has been facing in recent months.

"No matter how many tents or mattresses are sent to us, there will always be a shortage of supplies unless the flow is cut off," he wrote.

"Both tents and mattresses are needed, but this is not the axis of the EU's migration policy. The main task we are delegating to EU agencies is to help us break up the network and return people."

Europe lacks an effective migration policy, Landsbergis said, adding that Lithuania could become the straw that "will break the camel's back and we will eventually come to an agreement."

Europe still has a lot of unused leverage to persuade Iraq and Turkey to dismantle migration flows and force Belarusian President Alexander Lukashenko to change his mind, according to the minister.

This year so far, over 3,000 people have been caught illegally crossing into Lithuania from Belarus.

Lithuanian officials maintain that the unprecedented migration influx is being orchestrated by Minsk in retaliation for EU sanctions.