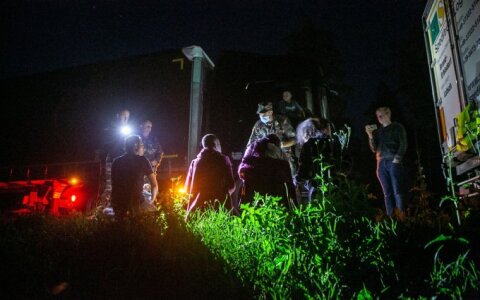 The Lithuanian, Latvian and Estonian defense ministers have agreed to coordinate their response to the migrant crisis, calling it the Belarusian regime's "hybrid attack" against the Baltic countries, the EU and NATO.

The three Baltic ministers held a video conference on Wednesday to discuss the worsening security situation in the region amid a spike in the number of migrants illegally crossing the EU's external border from Belarus, the Lithuanian Defense Ministry y said on Thursday.

The ministers "expressed their unity and solidarity regarding the security threats in the Baltic region and agreed to coordinate their response and common actions, both trilaterally as well as internationally", it said in a press release.

"The current situation on the border is not just a migrant crisis; it is hybrid warfare against the European Union, NATO and especially against the stability of the Baltic States," Lithuanian Defense Minister Arvydas Anusauskas said.

"This hybrid attack requires a united and coordinated response from the Baltic States," he added.

Estonian Defense Minister Kalle Laanet said, "This is a very severe security crisis that directly impacts all Baltic countries and NATO’s north-eastern flank. We are determined to continue to support Lithuania and seek international support and assistance to resolve this security crisis."

Anusauskas also thanked Estonia and Latvia for their support in beefing up the protection of Lithuania's border with Belarus and their humanitarian aid.

Estonia has supplied Lithuania with 100 kilometers of barbed wire and is planning to provide unmanned aerial vehicles and night vision systems. Latvia has already sent humanitarian consisting of tents, beds, generators and other essential items, according to the press release.

Lithuania has been facing an unprecedented influx of irregular migrants in recent months. This year so far, over 3,000 people have been caught illegally crossing into the country from Belarus.

Vilnius officials maintain that the influx is being orchestrated by the Minsk regime.