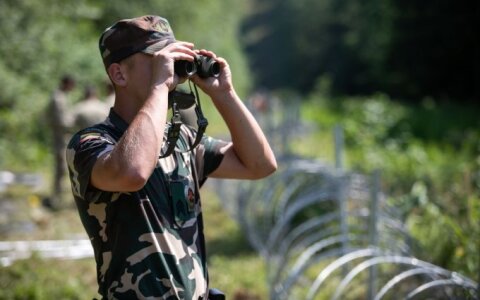 The construction of a fence near the Belarusian border has stalled in Lithuania due to a lack of razor wire products. Lithuania has already asked assistance from foreign countries, Interior Vice Minister Arnoldas Abramavicius says.

In a Facebook post on Friday, Lithuanian National Defense Minister Arvydas Anusauskas shared information that some 4.5 km of concertina barbed wire used in military engineering has been used from the army's reserve, adding that more of it is being awaited "from other countries".

Abramavicius later confirmed that information as being correct.

"To install concertina, first of all, we need to have it. That's the issue. We are now looking for it in different countries that could offer to sell it. They do not produce it in Lithuania. i.e., they cannot produce it of such a diameter in Lithuania. The nearest country is Poland but Poland has itself made an order of the protection of its own border," Abramavicius told BNS.

According to the vice minister, additional wire amounts are being looked for "on a bilateral assistance basis" as Lithuania is in negotiation with several countries, including Denmark and Slovenia, on the possibility to buy concertinas or have them donated.

Lithuania started erecting a barbed wire fence on its border with Belarus two weeks ago in response to a major influx of illegal migrants entering from Belarus. Interior Minister Agne Bilotaite said then the plan is to build a fence alongside the whole 550-km border section, adding that a higher wall will be built later on, valued at around 41 million euros.

Rustamas Liubajevas, chief of the State Border Guard Service, said two weeks ago a barbed wire fence could be installed over a course of several months.