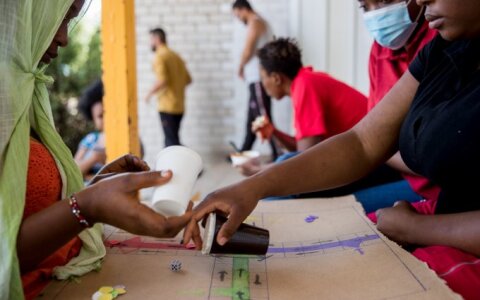 The state will reimburse municipal costs on the accommodation of migrants and will not set a strict cost "ceiling", Lithuanian Finance Minister Gintare Skaiste said on Thursday after meeting with the mayors of border municipalities.

Nevertheless, heads of the Lithuanian municipalities bordering Belarus, as well as nearby municipalities, says they lack clarity from the central government how long they would need to take care of migrants on their own. They also did not hear from the minister whether costs related to specialists' additional workload would be reimbursed.

"Lukashenko's travel agency does not include excessively comfortable conditions and there will be no rooms with sea view in Lithuania but that minimum service, including personal care services, food and the protection of those territories for local communities to feel safe, that will be reimbursed and municipalities will not need to look for their own funds for that," the minister told a press conference.

Skaiste also agreed that it's difficult for municipalities, contrary to the Foreigners' Registration Center, to estimate the future number of migrants and how many of them would have to be placed in quarantine and how much time they would spend here.

"Therefore, we have agreed not to set a universal (cost – BNS) standard, but municipalities need to follow the common-sense criteria. We will start from the need to ensure the lowest prices based on the situation of specific municipalities," the finance minister said.

In her words, cost reimbursement requests have already been received from three municipalities, with amounts for two-week accommodation of migrants ranging from 18,000 to 30,000 euros, but those do not include utility bills. Migrants are now live in eight municipalities in Lithuania.

The local mayors jointly say they have not been told yet how long will they need to take care of migrants. But they welcome the government's promise to reimburse their costs.

"The dates are very abstract. We were told that a center should be equipped in Dieveniskes by late August or the middle of it, and another one should be equipped in Svencionys District by, probably, the middle of October. Therefore, it's obvious that those refugees who were detained for ten days, for isolation, they are now living for a third week and that group can live until August or even until October. The general impression is that both officers and politicians cannot say today how long that influx will last," Varena Mayor Algis Kaseta said.

Some 2,300 illegal migrants have been detained in Lithuania so far this year, including. The majority of them are citizens of Middle Eastern and African countries.

A state-level emergency situation is now declared in Lithuania due to the spike in illegal migrants, with Lithuania taking additional measures to protect its border with Belarus, assisted by officers from other countries via the Frontex agency.

Lithuanian officials believe the Belarusian regime is behind the recent spike in illegal migrants, calling it an act of aggression against Lithuania amid tensions between Minsk and Vilnius following last year's contested presidential election in Belarus.