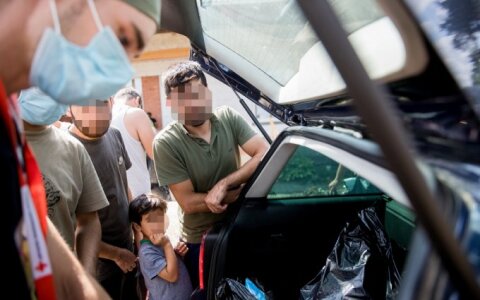 The Lithuanian Migration Department is currently unable to process asylum applications within 10 days due to its heavy workload, the authority's director said on Thursday.

"[Ten days] will not be sufficient, because there are so many applications, and we do not have so many employees, but we have started preparations and have increased the number of staffing positions," Evelina Gudzinskaite told LRT Radio.

Some 650 applications from migrants who have crossed the state border illegally are currently pending, according to the director.

"In fact, because of this increased workload, we currently [...] make these decisions within four weeks," she said.

Gudzinskaite said the department has so far processed over 200 asylum applications and denied 140 of them.

"Other 100-plus applications were closed because the asylum-seeker could not be contacted," she said.

Failure to process an application within 10 days will be considered a procedural violation, but the procedure will continue and the application will be processed, according to Gudzinskaite.

The director noted that ten days is an urgent procedure for dealing with obviously unfounded applications. If a case needs to be examined more closely, a general procedure of six months is followed.

In preparation for the increase in asylum applications, the Migration Department has announced 56 new job openings.

On Wednesday, President Gitanas Nauseda signed a package of amendments restricting irregular migrants' rights into law but noted that asylum seekers' rights "must not be restricted more than necessary" and called on the parliament to remove the shortcomings in the law in the near future.

This year so far, over 2,200 irregular migrants have been detained in Lithuania after arriving from Belarus.

The Lithuanian government has declared a state-level emergency situation due to the growing migration crisis.