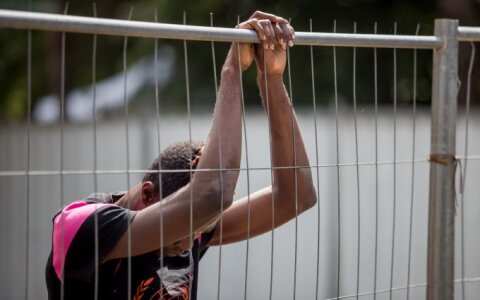 The Lithuanian parliament threw migrants' human rights "in the bin" when it passed a package of amendments to the country's migration law, Povilas Maciulis, Gitanas Nauseda's chief domestic policy adviser, said on Tuesday, adding that the president is considering vetoing the legislation.

"Every third phrase used in the rhetoric of the current parliamentary majority is 'human rights'," he told the Ziniu Radijas radio station. "Interestingly, when this law was being adopted, human rights were probably forgotten and thrown in the bin, because migrants were left without any human rights, with no right to appeal."

Nauseda is considering vetoing the amendments to the Law on the Legal Status of Aliens and will make his decision shortly, according to the advisor.

"Now the big question is whether to veto this bill with a proposal or [...] given the current context and situation, to sign it into law in the hope that the Seimas and the government will amend it at the start at the Seimas autumn session," Maciulis said.

Related articles
Foreign minister to Lukashenko: it's not help, it's blackmail  (1)
Locals stage protest outside ministry over plans to house migrants

The Seimas passed the amendments during an extraordinary session last week, in response to a growing influx of irregular migrants from Belarus.

The new legislation, among other things, reduces the processing time of migrants' asylum applications, curbs their right of appeal, and restricts their free movement in Lithuania.