Lithuania turns to UNHCR and IOM amid growing migration crisis 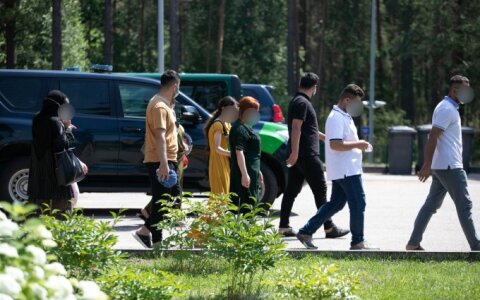 Lithuania has turned to the UN High Commissioner for Refugees and the International Organization for Migration (IMO) amid an influx of irregular migration via Belarus.

Andrius Krivas, Lithuania's permanent representative in Geneva, has sent letters to UN High Commissioner for Refugees Filippo Grandi and IOM Director General Antonio Vitorino, informing them about the situation and asking their organizations "to react in accordance with their mandates", the Lithuanian Foreign Ministry said on Wednesday.

The Lithuanian government believes that the Minsk regime "artificially stimulates illegal migration and uses it as a political weapon against Lithuania for its principled vocal stance with regard to the multiple unprecedented grave violations of human rights in Belarus," the ambassador said in his letters.

Krivas asked the UNHCR and the IOM to give a public assessment of Belarus' policy and to put the issue on their agendas. The ambassador and Vitorino discussed the issue during their meeting on Monday.

More than 1,800 people have been detained in Lithuania after illegally crossing in from Belarus this year so far, compared to just over 80 in the whole of 2020.

The Lithuanian government has declared a state-level emergency situation due to the growing migrant crisis.

Lithuania turns to UNHCR and IOM amid growing migration crisis