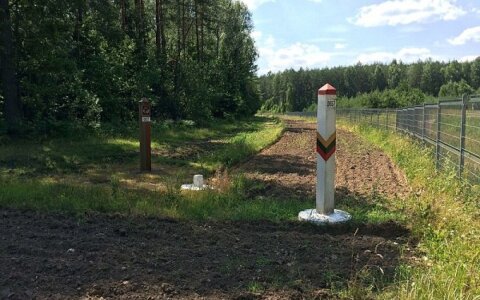 Lithuania is on Friday starting the construction of a wire fence on Lithuania's southern city of Druskininkai on Friday to manage the inflow of illegal migrants entering the country from Belarus.

"Troops should start building it," Giedrius Misutis, spokesman for the State Security Department, told BNS, adding that the fence will be built along part of Druskininkai Frontier Station's section that is 30 km long.

"Border guards are not involved, they have only shown the section itself," Misutis said.

Druskininkai Frontier Station's section is where the majority of migrants are detained. A total of 512 migrants have been detained here so far this year.

Some 1,546 illegal migrants have been detained in Lithuania so far this year, mainly people from Middle Eastern and African countries. Lithuanian officials say the Minsk regime is behind the recent surge in illegal migrations.

In response to the influx of illegal migrants, the Lithuanian government declared a state-level emergency in the country last week.

Earlier, Interior Minister Agne Bilotaite said the plan was to cut the existing procedure for considering an asylum request to ten days.