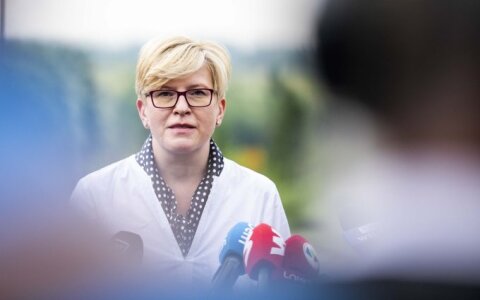 Ukraine has been making strong progress with the implementation of reforms despite the ongoing war but a fight against corruption and judiciary reforms remain a key priority, Lithuanian Prime Minister Ingrida Simonyte has said.

“Compared to us, Ukraine has to implement reforms in a much more complicated environment as it simultaneously has to defend itself against military aggression and part of its territory has been occupied. However, despite the ongoing war, Ukraine has been implementing reforms at a much more rapid pace compared to the entire period before the Maidan,” she said during a news conference at the Seimas on Thursday.

“It has been implementing land reform, reforms in the banking sector and the energy sector, whereas the decentralization of governance and achievements in the areas of public administration and digital transformation are impressive indeed. We see huge progress but there are always areas that require even more efforts and, first of all, that is a fight against corruption and judiciary reforms as well as transparency in the management of state-owned enterprises,” she added.

Ukrainian Prime Minister Denys Shmyhal said during the joint news conference that fights against corruption and shadow economy were among the priority tasks of the country.

“Shadow economy accounts for a large share [of GDP] in Ukraine and the solution may possibly lie in corporate governance reforms. We have 35,000 state-owned enterprises and have to improve their governance, to promote privatization of such companies,” he said.

“We have perfect examples when the results of privatization of small companies exceeded our expectations. Privatization and improvements in governance are the key tasks,” Shmyhal added.

The Seimas on Thursday continues to host the Ukraine Reform Conference in Vilnius, now on its second day.

The two-day event is attended by Lithuanian and Ukrainian President Gitanas Nauseda and Volodymyr Zelensky, Simonyte and her Ukrainian counterpart Shmyhal, Speaker of the Lithuanian Seimas Viktorija Cmilyte-Nielsen, as well as foreign ministers and officials from Ukraine, European Union (EU), NATO and other countries, representatives of international organizations, international financial institutions, business and civil society.