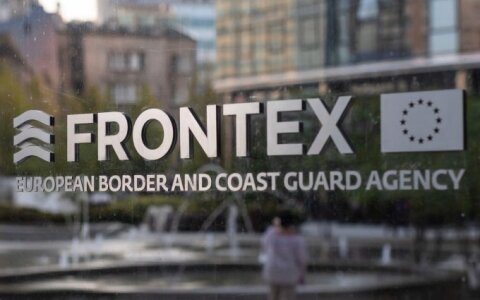 More officers from the European Border and Coast Guard Service (Frontex) are set to come to Lithuania amid the recent spike in illegal migration, a presidential adviser says.

"As you know, 30 of them have already come to Lithuania. And more are expected to come," Asta Skaisgiryte, the chief presidential adviser on foreign policy issues, told the public radio LRT on Thursday, without providing a specific number.

Frontex had decided to send 30 officers before the illegal migration situation peaked in Lithuania last week when over a hundred illegal migrants crossing from Belarus were detained every day.

Skaisgiryte says the president raised the issue of migrants coming in from Belarus during the recent European Council meeting, and "really received support and understanding".

In her words, Greek Prime Minister Kyriakos Mitsotakis responded to Lithuania's requests for help and said that Greece could share its experience in managing a migration crisis after the country faced a major migration crisis in the middle of the last decade when huge numbers of asylum seekers from the Middle East would come to Greece via the Mediterranean Sea.

"Help from everyone is very much welcome. Of course, it has to be done as soon as possible," Skaisgiryte said.

More than 1,400 illegal migrants, most of them without documents, have been detained at Lithuania’s border with Belarus so far this year, with the majority of them coming from the Middle East and African countries.

Lithuania declared a state-level emergency on Friday due to the recent surge in illegal migration. Lithuanian officials say it is a campaign organized by the Belarusian regime against Lithuania.