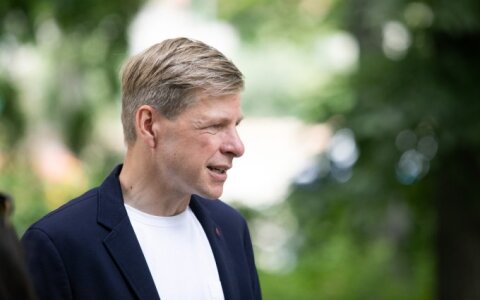 A wall or other physical measures are needed to resolve the drastically increased problem of illegal migration, Vilnius Mayor Remigijus Simasius says.

He has urged "to send a message to the international community and potential migrants" that Lithuania is not a country that "keeps gates open" for foreigners to reach Western Europe.

"Our neighbor is obviously waging a hybrid war, Lithuania really needs a clear response to that. Collecting migrants near the border or somewhere else, bring them in and accommodate is what we need to do for humanitarian reasons. But that's not enough as we need either a wall or a live shield or other measures to ensure that there are fewer of them. As today we have a problem of hundreds (illegal migrants – BNS) and we can have a problem of thousands if it is not resolved fundamentally," the mayor said.

In his words, Vilnius authorities are also considering accepting and accommodating refugees in their premises at least for up to ten days. They have vowed to provide a list of such premises on Wednesday.

"I am not that optimistic about the ten days as I think it might evolve into a longer period of time. But in any case, even if we manage to offer measures, in proportion to our population, where we could provide temporary isolated refuge, I really cannot promise very comfortable conditions. (…) Those would be big premises, but not a hotel or something like that," Simasius said.