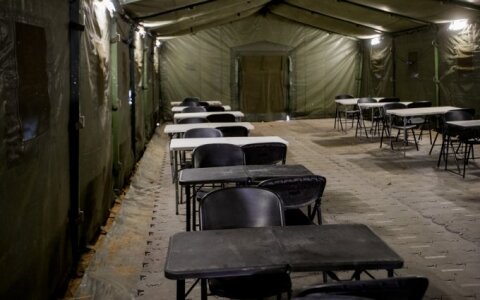 As the number of incoming illegal migrants crossing into Lithuania from Belarus continues to grow, Lithuania's Migration Department processing asylum requests is rushing into hiring more staff but also says many asylum requests will end up in drawers.

Evelina Gudzinskaite, director of the department, says it now takes three weeks to process an asylum request and the period will get longer due to the fact that over one hundred new migrants a day have been arriving in Lithuania in recent days.

"Processing itself will take longer and they (requests – BNS) will wait for their turn. Requests will accumulate unprocessed," she told BNS on Monday.

She confirmed that eight Migration Department specialists used to process asylum requests before the crisis, and their number was later doubled from internal resources. Moreover, the department has also opened two selections for asylum specialists and is set to announce another 12 shortly.

Gudzinskaite says these specialists will be employed on temporary contracts until the end of 2021. The department is also awaiting the Interior Ministry's decisions on additional positions for specialists processing asylum requests and has also asked for additional funding for translation/interpretation services.

The Migration Department has so far rejected 89 asylum requests from migrants who have arrived in Lithuania this year, with no asylum requests approved. Requests are rejected after it is determined, with the help of intelligencer officers, that people are not facing any threat in their country of origin, Gudzinskaite said.

Asylum seekers can then appeal and the whole appeal process can take up to six to eight months, the director of the Migration Department says. The process can take even longer as migrants can lodge new requests once their previous attempts were rejected, which is allowed both after court rulings and before them.

According to Gudzinskaite, people making use of this opportunity can lodge an indefinite number of asylum requests and it's impossible to start the procedure for their return to their country of origin whole their requests are being processed.

"It's a loophole of the European directive. Of course, it stipulates that if a migrant's repeated request is unfounded, it can be just rejected without processing. But that decision should still be motivated and can be further appealed with courts," Gidzinskaite said.

"And this kind of game is taking place and we have seen cases when people go several times through this rollercoaster. It's a time-consuming technical job," she added.

The processing of another 59 asylum requests has been discontinued this year due to failure to contact the asylum seekers. Gudzinskaite suspects that these people must have just fled Lithuania.