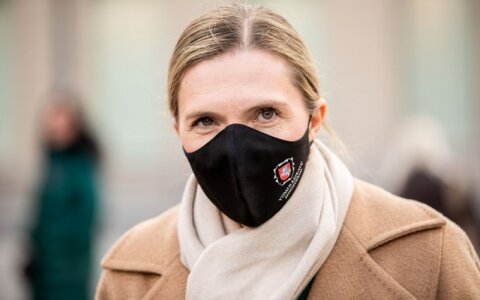 All Lithuanian municipalities had been asked to consider accommodating illegal migrants flooding into Lithuania from Belarus, Minister of the Interior Agne Bilotaite said adding that the authorities were also considering a possibility to mobilize the military.

The minister also said that she had ordered to start building a tent camp capable of accommodating more than 1,000 people.

“I’d like to say that we have approached all Lithuanian municipalities and asked to provide all information, by July 7, about possibilities to accommodate illegal migrants and specify financial and other needs,” Bilotaite said during a news conference in the district of Varena late on Sunday.

“This issue is not limited just to tents, it also involves the aspects of logistics, catering and hygiene,” the minister added.

All institutions of the Ministry of the Interior would be involved in efforts to ensure the population’s safety, she said adding that the authorities mulled a possibility to mobilize volunteer troops.

“I’d like to assure that the Ministry of the Interior will ensure full-fledged protection and will involve all its institutions – the police, border guards, public security officers – for this purpose and will also ask the Riflemen’s Union for assistance,” the minister said adding that the ministry also considered a possibility to mobilize volunteer troops “to help us handle the situation and to ensure that people who would see illegal migrants accommodated in their neighborhood feel safe”.

The minister also said that the competent authorities were making decisions on additional infrastructure for accommodating migrants, which included a number of modular houses that would be built by July 28 and the hangars under construction in the municipality of Druskininkai.

Also, Bilotaite said that she had ordered to start building a tent camp that would be capable of accommodating approximately 1,000 illegal migrants.

A total of 1,098 illegal migrants have been detained in Lithuania so far this year, having crossed in from Belarus, which is more than 12 times more than in full 2020.

Faced by the influx of migrants from the neighboring country, the Lithuanian government on Friday declared a state-level emergency situation.

Prime Minister Ingrida Simonyte said on Friday that she believed that the influx of illegal migrants from Belarus was the revenge for the European Union’s (EU) common stance on the crackdown by the Minsk regime against the civil society, repressions and the forced landing of a civil aircraft in May.