President calls on EU to consolidate positions on ties with China 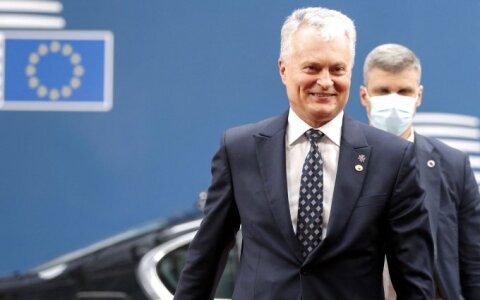 Lithuanian President Gitanas Nauseda has on Thursday called on the EU to consolidate positions on relations with China, the presidential press service said.

The move comes after Lithuanian recently left the 17+1 format of cooperation between Central and Eastern European countries and China.

In a letter to President of the European Council, Charles Michel and the prime minister of Slovenia, the incoming EU presidency, the Lithuanian president draws attention "to the need to consolidate positions of the EU member states on relations with China", the statement reads.

"It is now time for the European Union to assess the political and economic realities and prospects, the human rights situation in China, and to discuss a further EU-China relations strategy that will allow better coordination of positions and actions," the statement issued by the presidential press service states.

A discussion on relations between the European Union and China is planned at the forthcoming European Council.

In late May, Lithuania announced its decision to leave the 17+1 format, calling it "divisive".

Lithuanian-Chinese relations have been souring in recent months as Beijing has criticized Lithuanian decisions to block Chinese investments and plans to open trade representations in Taiwan China considered to be its rebellious province.

President calls on EU to consolidate positions on ties with China