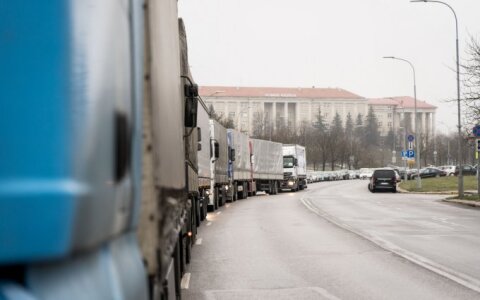 Lithuania's Ministry of Social Security and Labor has proposed to withdraw part of the country's lawsuit filed with the EU Court of Justice over the Mobility Package adopted last year and regulating haulers' operation in the EU.

For example, the ministry suggests that Lithuania should not contest the requirement that prevents drivers from resting in their truck cabins.

"It is very important for employers to ensure that drivers get rest outside vehicle cabins every week and for them to do that under proper conditions meeting hygienic standards," Minister Monika Navickiene told BNS.

The ministry is also proposing not to contest the requirement for truck drivers to return to their place of residence or the company's business center every four weeks as the European Commission has said it’s only a recommendation.

The proposals are being presented to the government and it will make the final decision.

Transport Minister Marius Skuodis said earlier Lithuania is in favor of the package's provisions improving workers' conditions but is against the requirement for trucks to return to their country of registration every eight weeks.

The latter requirement has also been criticized by the European Commission as it said such a rule would increase pollution and undermine the EU's internal market.

Earlier, Lithuania filed lawsuits with the EU Court of Justice over certain provisions of the Mobility Package, and also last year joint six other states' lawsuits against the EU Mobility Package's provisions on the mandatory return of trucks to their country of registration and restrictions on cabotage.

Besides Lithuania, eight other countries, including Latvia, Estonia, Poland, Romania, Bulgaria, Hungary, Cyprus and Malta, were against the new rules but there were too few of them for the decision to be blocked.

Some provision of the new package came into force in October, and another part, including the return of trucks to their countries of registration, is set to come into force in February, 2022.