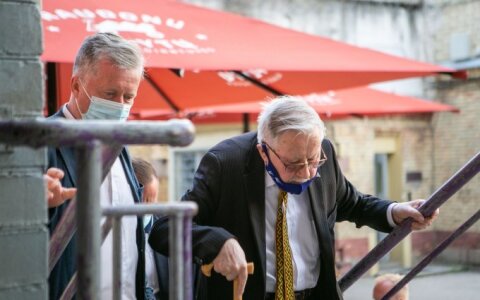 A bill on granting Vytautas Landsbergis, Lithuania's first post-independence leader and former chairman of the Supreme Council-Reconstituent Seimas, the head of the state status, has been registered in the Seimas of Lithuania.

The bill on the legal status of the former chairman of the Supreme Council-Reconstituent Seimas was registered by Speaker of the Seimas Viktorija Cmilyte-Nielsen, MP Radvile Morkunaite-Mikuleniene, the elder of the ruling conservative Homeland Union – Lithuanian Christian Democrats' political group in the Seimas, MP Ieva Pakarklyte, leader of the Freedom party's political group, and MP Paule Kuzmickiene.

The politicians behind the bill say they drafted it "having taken into account the political, historic and legal circumstances and work done, which determined the Supreme Council-Reconstituent Seimas' chairman's exceptional constitutional, political and legal status while performing the duties delegated to him by members of the public".

The bill's explanatory note also states that the chairman of the Supreme Council-Reconstituent Seimas had the mandate to represent Lithuania in international relations, to sign laws, negotiate and sign international treaties, accept credentials from foreign diplomatic representatives etc.

The explanatory note also additionally mentions Prime Minister Ingrida Simonyte and Eugenijus Gentvlas, leader of the Liberal Movement's political group in the Seimas, among the initiators of the bill.

There were previous attempts to secure the head of the state status for Landsbergis during the previous parliament but the initiative of the then Speaker Viktoras Pranckietis failed to garner sufficient political support.