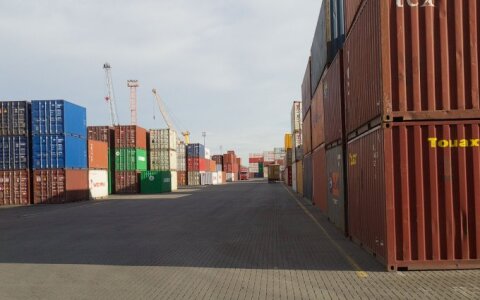 As the European Union is set to ban exports of potassium fertilizers from Belarus via the Lithuanian port of Klaipeda, the latter will find it hard to quickly find alternatives, say an economist and a representatives of the country's association of stevedoring companies.

Vaidotas Sileika, president of the Association of Lithuanian Stevedoring Companies, who also leads one of the largest stevedoring companies, Klaipedos Konteineriu Terminalas (Klaipeda Container Terminal, or BKT), says that the situation after the loss of Belarusian cargo would be difficult since there's hardly any alternative cargo that could replace it.

"If in the short term, today, we lost the Belarusian flow, so I think the situation would be fairly complicated," he told BNS. "There's no cargo that has no port. In fact, all cargo moving via the Baltic states today, it would be difficult to lure it elsewhere as it would be a long period. It depends not only on the input of port companies, but also on rail rates and other things."

The EU is gearing up this week to impose sectoral sanctions for Belarus in response to the forced diversion and landing by Belarus of a Ryanair passenger plane, en route from Athens to Vilnius, in Minsk to detain a Belarusian opposition blogger. The sanction package will cover seven sectors, including the Belarusian trade in potassium fertilizers with the EU.

"Of course, it will not happen in a day, that's a fact," she told BNS.

In her words, both the port of Klaipeda and Lietuvos Gelezinkeliai (Lithuanian Railways), the country's state-owned railway company that carries Belarusian cargo, are very much dependent on Belarus, and the existing stable inflow of cargo is a certain "comfort zone" the companies did not even want to move in 2014 when the Ukrainian-Russian conflict broke out.

Turkey and Ukraine as alternatives?

Algis Latakas, CEO of the port of Klaipeda, hinted earlier that Lithuania might start looking at the Turkish and Ukrainian market amid the threat of losing Belarusian cargo.

But Genyte-Pikciene says many questions arise in the existing context as to how cargo from Turkey or Ukraine would be carried.

"It will very much depend on sanctions and whether sanctions will include transit. If they do, then a lot of questions arise as to how that will be separated from Belarusian goods," the economist said.

Sileika is also skeptical about the possibility to compensate the loss of Belarusian cargo with cargo from Turkey or Ukraine.

"In reality, we can hardly expect big flows from these directions to compensate for the lost ones we have now. It will take time for us to link certain flows with certain countries and find new clients," he said.