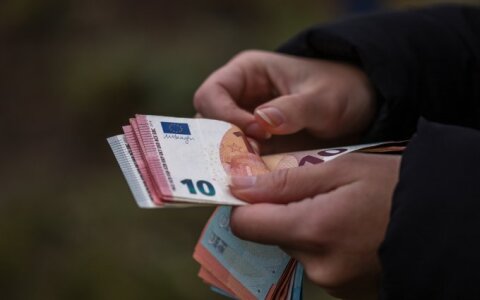 Lithuania's Ministry of Social Security and Labor has proposed to the government to increase the minimum monthly wage in the country by 61 euros (9.5 percent) to 703 euros (before tax), and raise the hourly rate by 3.93 euros (9.4 percent) to 4.3 euros.

"To reduce income inequality and poverty, we propose increasing the minimum monthly wage and the minimum hourly rate from the start of next year. These goals are included in the government program, and the economic estimates for making the necessary decision are favorable," Minister Monika Navickiene was quoted as saying in a statement released by the ministry.

Earlier this month, the Tripartite Council involving representatives of employees, employers and the government, failed to agree on how much the minimum wage should be increased as employee representatives wanted it to be increased to 750 euros, and employers objected to it being increased at all, citing uncertainty over the pandemic's effect on businesses.

Some employer representatives proposed backing an increase to 703 euros on the condition that the government would not cut post-pandemic assistance to businesses.

The minimum monthly wage was last increased in January, to 642 euros (before tax), from 607 euros. There were some 147,000 people in Lithuania earning the minimum wage or less in April.

The state budget would need around 15 million euros for the minimum pay increase.